Two typical intertwining tube slides by the German artist Carsten Höller will stand central to an installation which he will show in collaboration with the founder of the study of plant neurobiology Stefano Mancuso, at Florence's famed renaissance landmark Palazzo Strozzi, this spring and summer. Covering the courtyard and facade, the site-specific installation will encourage visitors to examine the empathetic relationship between themselves and the botanical world. 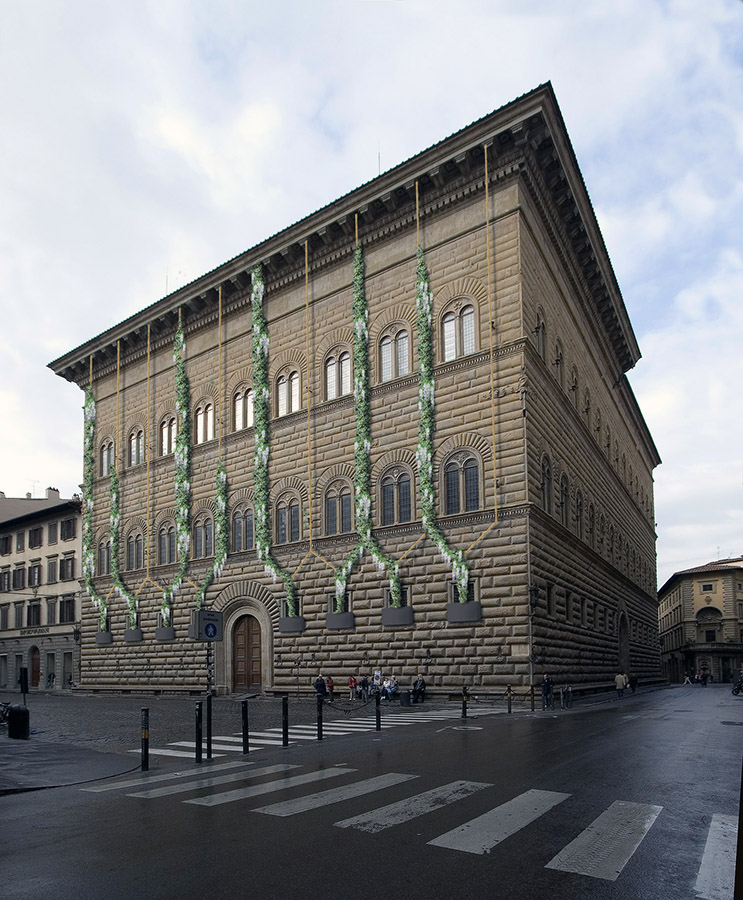 The Florence experiment, as the work will be called, will be part of a wider show curated by Arturo Galansino, the Fondazione Palazzo Strozzi director general. Set to be built inside the courtyard of the opulent Palazzo, Höller's slides are meant to be an interactive work. Visitors will be handed a plant to take with them on one of the slides from the second-floor terrace of the Renaissance palace to the courtyard below. After the 20-metre spiral downwards, they will be able to descend to a laboratory in the basement, where scientists will be available to measure and analyse if and how the person’s emotions have affected the photosynthetic parameters and molecular structure of the plant.

Carsten Höller (1961) grew up in Brussels, but to German parents, and lives in Stockholm and Ghana. He holds a doctorate in agricultural science, and specialized in plant pathology and insects' olfactory. .Only during the late 1980s did he first begin making art. However, he worked as a research entomologist until 1994. He came to prominence in the 1990s alongside a group of artists including Maurizio Cattelan and Douglas Gordon, who worked across disciplines to reimagine the experience and the space of art. In his work, Höller creates situations which question familiar forms of perception and allow exhibition visitors to experiment on themselves, often inviting the public's active participation in so-called "influential environments". In their form, Höller's works are occasionally reminiscent of scientific laboratory arrangements, allowing the viewer to become the subject of an experiment. Next to buildings, vehicles, toys, games, narcotics, animals, performances, lectures, 3D films, flashing lights, mirrors, eyewear and sensory deprivation tanks, a series of corkscrewing tubular metal slides play an essential role in his work. 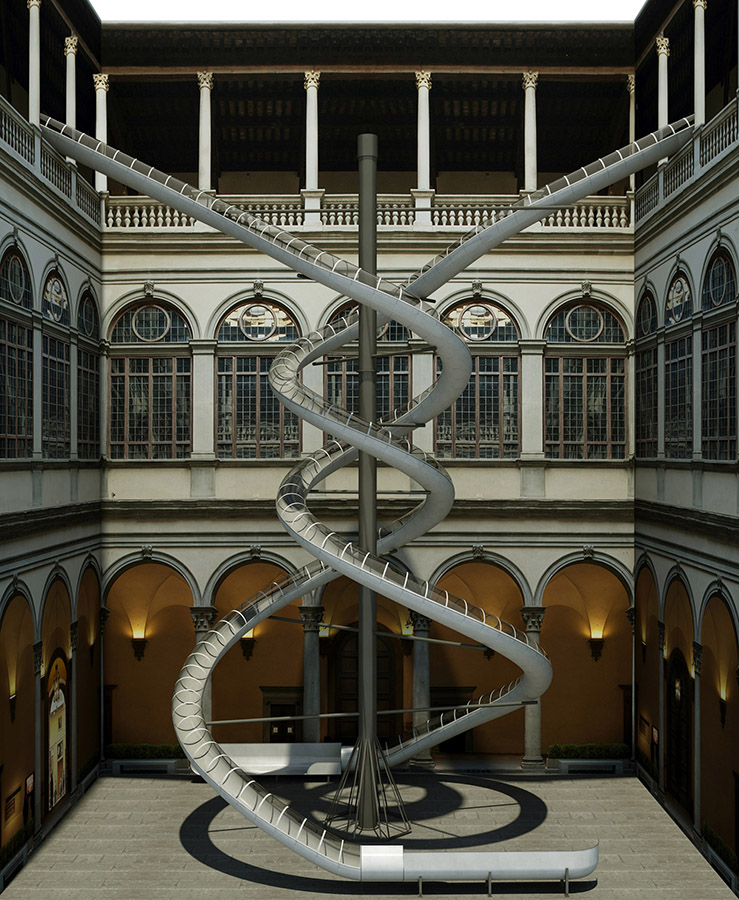 Höller’s interest in slides ranges from their use as a practical and alternative means of transportation and the effect of sliding itself, which involves a loss of control, vertigo and an emotional response from the sliders, often delight. He is also interested in the shape of slides as a counterpoint to rectangular architecture, as in the Palazzo. His most famous slides include that made for the office of Miuccia Prada in Milan and the first slides made for the Berlin biennale in 1998. In London, he wove a slide through Anish Kapoor's ArcelorMittal Orbit, a 76-metre-high chute that whirls riders round a series of corkscrews at speeds of up to 14 miles per hour. The top is transparent in sections, giving sliders views over the city as it rushes past. And only last month Höller opened a pair of towers with slides at a shopping mall near Miami for visitors to race each other down.

A second part of the installation at Palazzo Strozzi will consist of two cinemas set up in the laboratory, one screening scenes from comedy films, and the other showing clips from horror films. The expectation is that the audience's contrasting reactions will produce "volatile chemical compounds" in the air, which will then be piped through a series of tubes to the exterior of the Palazzo. The compounds are supposed to affect the climbing wisteria plants on the facade. Over the course of the spring and summer, the vines are expected to grow in different directions in response to the fear or delight of the cinema-goers, plotting a "plant graph" that will serve as a visible demonstration of the interaction between human emotions and plant behaviour.

“Palazzo Strozzi will thus become a site of real contemporary experimentation and reflection,” curator Arturo Galansino states, “turning an architectural Renaissance masterpiece into a workshop of dialogue between art and science.”

The Florence Experiment opens from 19 April – and will run until 26 August 2018.