THE BOGOTA FOREST OF HOPE

As its name and shape imply, the Bosque de la Esperanza in Colombia's capital Bogotà, is –not just meant to be another open-air sporting court and public plaza, but also ‘a symbol of nature, union and hope’ for the slum area of Altos de Cazuca where it is situated.

The forest was designed by Giancarlo Mazzanti,the architect who probably more than anyone else helped to put his native country Colombia, on the architectural world-map over the last few years, Assembled from prefabricated and expanded steel mesh dodecahedrons that are an ancient symbol for architecture, and rest on two lines of steel stilts which sprout up at multiple angled trajectories, the 700 m2 canopy structure also gets part of its fascination and tension from the inclined site on which it is located. 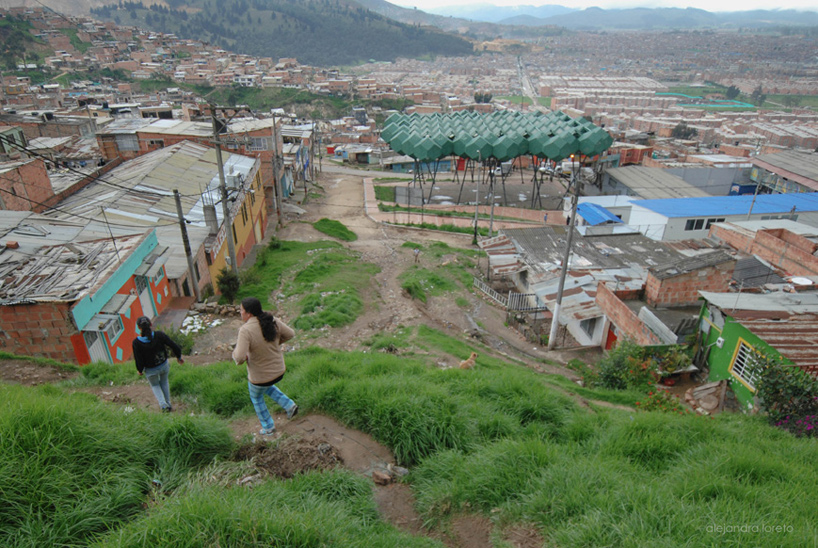 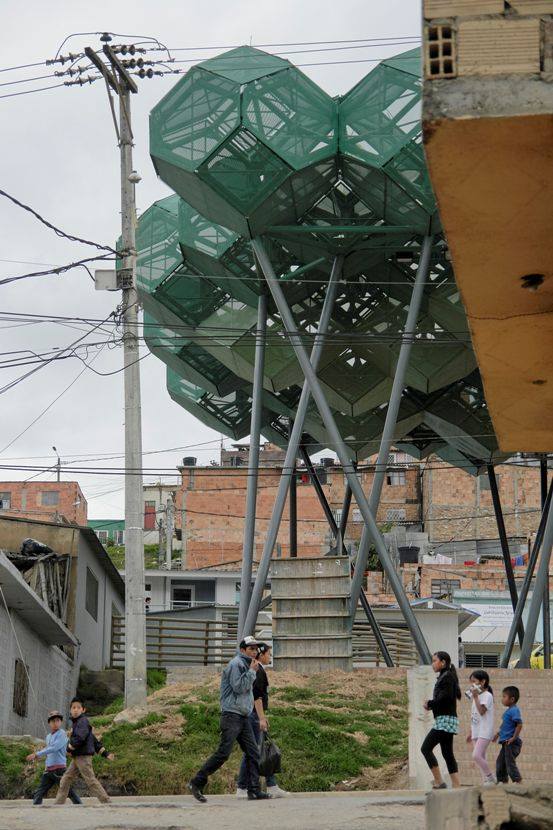 It stands smack dab in the shanty town of Soacha, Altos de Cazucá, an area that houses thousands of people that have been displaced from their home towns due to recent conflict.

Poor in public infrastructure, the area is also reputed to be quite a violent neighbourhood. Serving as a public plaza and meeting point for the locals, the canopy structure hovers over a concrete playing field which can host a variety of sports and activities, fostering a cooperative community. 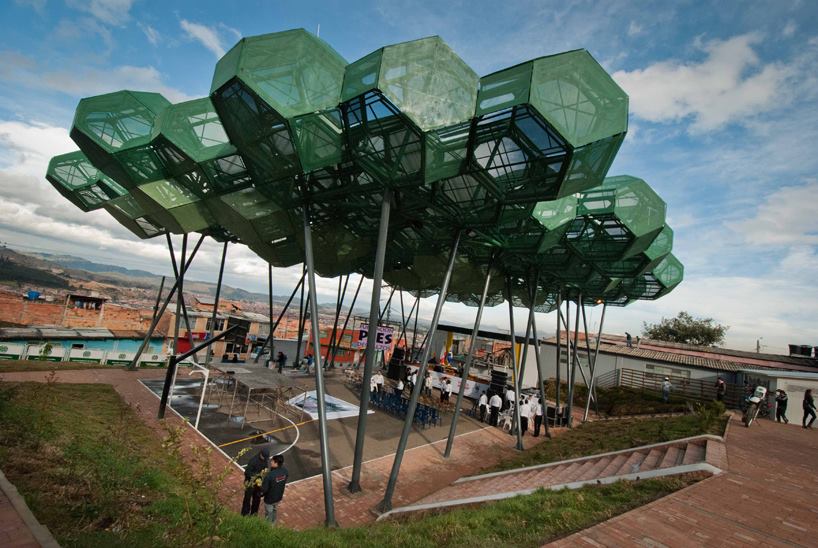 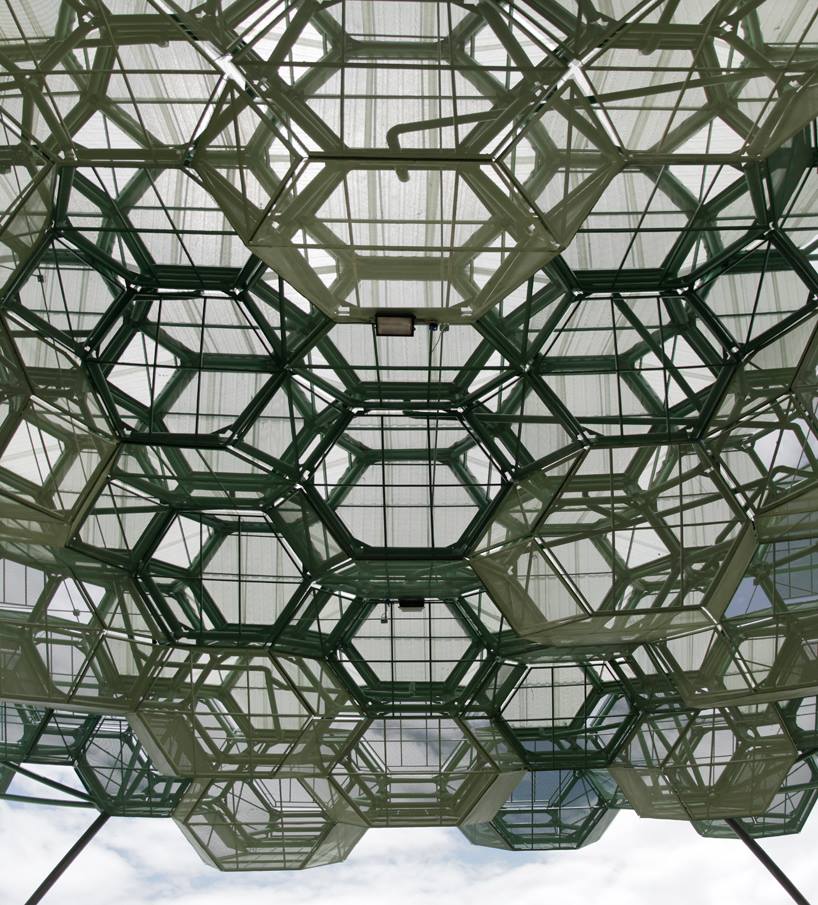 The expanded steel mesh that wraps around the dodecahedrons offers a light and porous lattice and shading, and a ventilated space that openly communicates with the adjacent street life. Once dark, artificial lights incorporated into the structure allow the canopy and space below to glow, resulting in a design that also acts as an inviting public forum to the neighbourhood at night. The shanty towns of Bogotà occupy 55% of the city’s fabric. Mazzanti, who over the last few years developed a series of iconic landmarks in Colombia, such as the Sportscenario for the 2010 Southamerican Games and the Espana Library Park in Medellin, and the El Porvernir Kindergarten in Bogota, works from the belief that the main value of architecture lies in social change.

Completed in 2011, his Hope Forest is therefore also meant as a modular and open project, that has the potential to grow and adapt to different situations, by adding modules depending on the circumstances, growing like a forest, "evoking a symbol of nature, union and hope in the area", and a catalyst for positive change. Completed in 2011) (mb) All images Jorge Gamboaor Alejandra Loreto / Courtesy Giancarlo Mazzanti 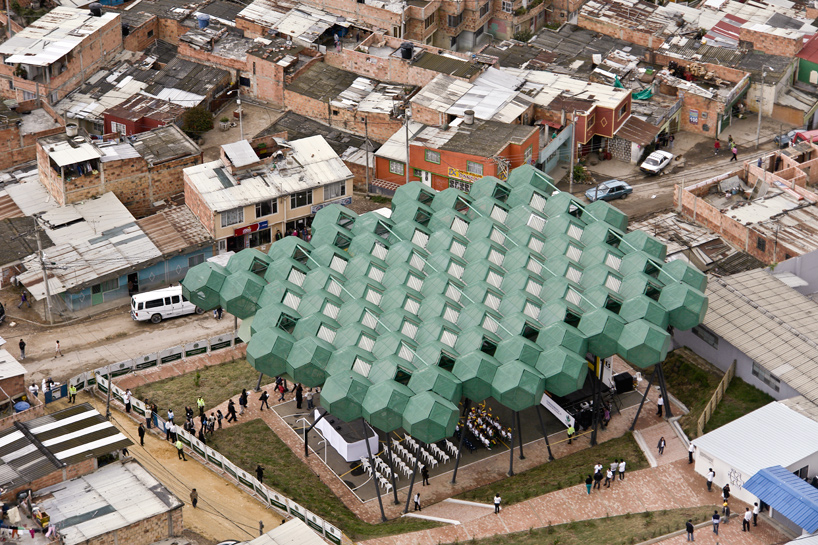