A HOUSE FOR EVERYONE? VISITING JEAN PROUVÉ'S MAISON TROPICALE AT KANAL BRUSSELS

Whereas the newly opened Kanal arts centre in the Belgian capital Brussels is denounced by its critics as just another example of cultural neo-colonialism, because of the way in which its program has been outsourced by the Brussels government to the Paris-based Pompidou conglomerate, an example of old school African colonialism, Jean Prouvé's Maison Tropicale, stands central to one of the exhibitions in the vast spaces of the former and iconic Citroën service station that houses Kanal. The house silently -and involuntarily, for sure- warns visitors of how colonialism invariably seems to come with Apartheid and segregation.

Many reasons converged to include the Tropical House by the pioneering French architect and designer Jean Prouvé in Kanal Brut, the inaugural presentation of Kanal, before the renovation starts in 2019. The Centre Pompidou had the huge prototype in its collection, but struggles with a lack of space in its Paris' headquarters, while the service station - the largest of its kind in Europe when it was built- has 35.000 sqm on offer. Like many other pieces in the presentation, the prefabricated and standardized metal steel structure of the Tropical House also beautifully enters into a dialogue with that former function of the building, which is still very visible everywhere, especially in this pre-renovation phase. And last but not least: the piece also strongly appeals to a colonial past which Belgium has not even started to come to terms with, despite the presence of a huge African community in its capital, that serves as a constant reminder. Already the initiative to include the house in the inaugural exhibition, could therefore refute the critique that Kanal would not be willing to debate local policy, and limit its role to that of just another showcase for the international art world. Yet as we all know, one swallow does not make a summer. Do the initiators really have the intention to turn the arts centre into A House for Everyone, the locals in particular? 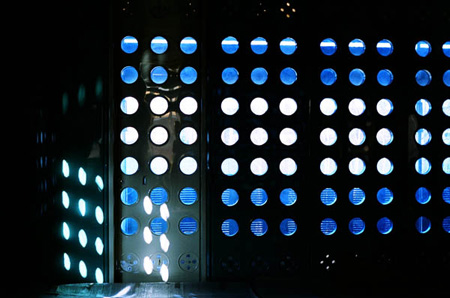 'A House for Everyone'

part of Station to Station, one of a series of most impressive exhibitions a the newly opened arts centre

'A House for Everyone' is also the title of the presentation of Jean Prouvé's Maison Tropicale, as part of Station to Station, one of a series of most impressive exhibitions a the newly opened arts centre, and a show which also features Toyo Ito's Pao II, Dwellings for the Tokyo Nomad Woman, and Ross Lovegrove's Lasvit Liquid Kristal Pavilion. The title was taken from a brochure which figures elsewhere in the presentation, A chacun sa Maison. Construis ou fais Construire. It was published by the Bureau de l'Information pour indigènes (Information Office for Natives) in Leopoldville (Kinshasa) in 1953, the very same year in which Jean Prouvé came up with his Tropical House. Both had the same purpose: to help solve the postwar housing crisis that did not just affect Europe, but also, and much harder, Africa.

Spread over four large table next to the Tropical House, a series of archival documents and from the Brussels based CIVA architectural collections in particular, offers contextualization and illustrates how Housing for the Congolese became a major component of the 1949 Ten Year Plan for the Economical and Social Development of Belgian Congo. It gave rise to a number of experiments, also in terms of architectural typology, but resulted in construction that was almost invariably generic- be it only because the Belgian architects did not even take the trouble or dare to travel to the 'Heart of Darkness'. 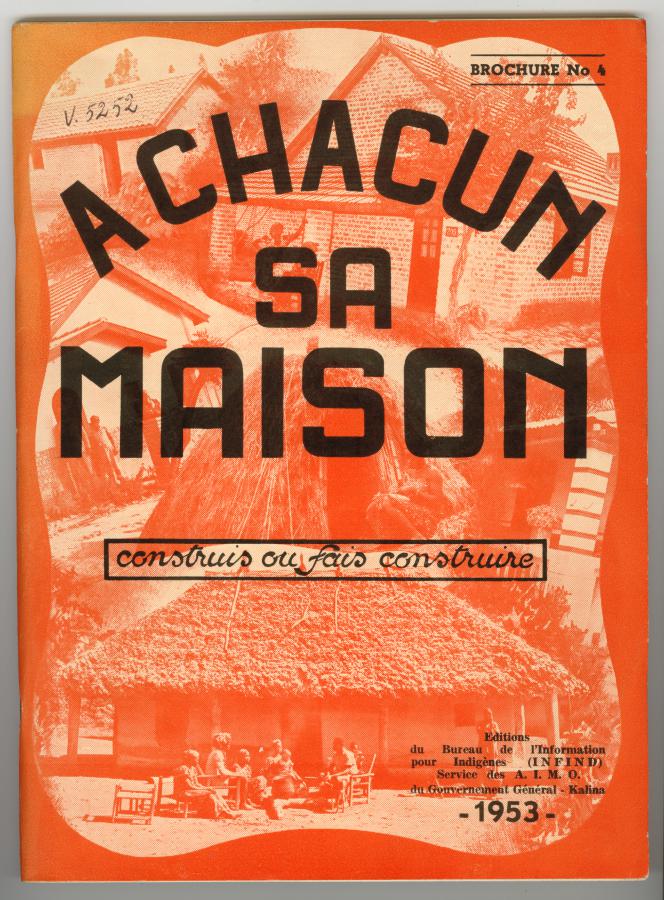 Prouvé's Maison Tropicale was an exception. Based on research and experiments that went as far back as his 1930s efforts to fulfill orders for army barracks, and refining the architect's revolutionary ideas on standardisation and prefabrication, it was already regarded as an apt solution for building in a tropical climate at the time when it was designed. And today it is widely considered as an icon of modern architecture in Africa. The design consisted of a catalogue of parts, based on the principle of modularity, combining materials that went from steel and aluminum to glass and wood, and prefabricated and factory made interior porticos, natural ventilation and roof venting devices, sun shades with mobile slots, and facade panels with insulating material. 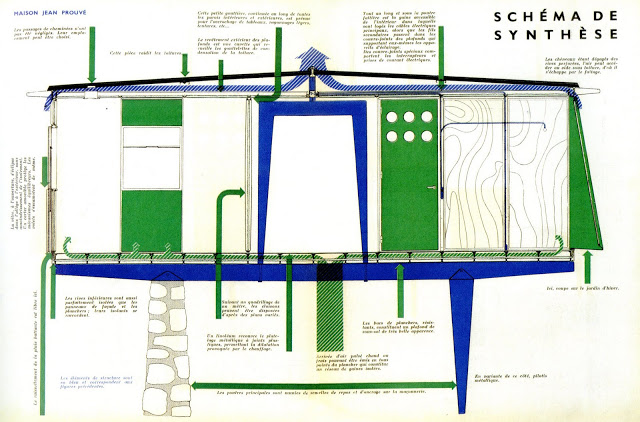 Nevertheless, designed to be produced in large numbers, only 3 prototypes were built, two of them in Africa, where they served as show houses, and were largely forgotten, before being repatriated, and becoming objects of speculation for the international art world. The Tropical House thus also became a symbol of Prouvé's thwarted and frustrated efforts to get his designs into mass production. 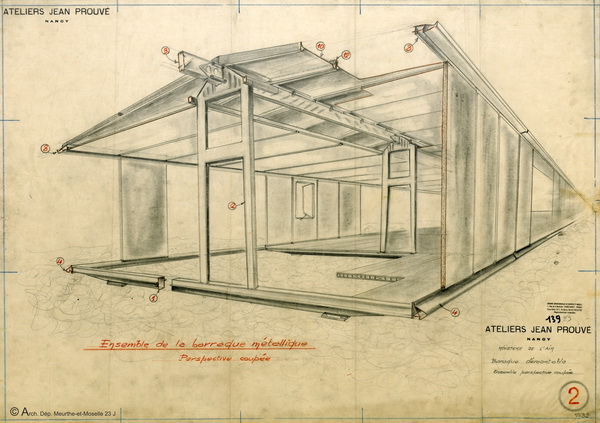 His design also had another flaw. For as the documents in the presentation demonstrate, whether conservative or innovative, all the projects and realizations that addressed the issue of post-war housing in Belgian Congo, including the Tropical House, were still very much in the context of the colonial order. Based on the principle of racial segregation they were all variations on the theme „living together, separately“. Until the dawn of independence, life in Belgian Congo was governed by racial separatism in every field, including town planning, dividing a city into a European town and a native town within the same territory, and separating them by a neutral zone, sometimes also referred to as cordon sanitaire.This segregation politics also continued within the houses, separating living areas for the white families from service areas for the 'boys', with an 'office' serving as a buffer zone. Servants were lodged in the garden, next to the garage or storage areas, or even in the henhouse, in a modest accommodation called the 'boyerie'. Jean Prouvé's Tropical House offered no exception to this principle: the boys were lodged outside the house while the circulation plan limited contacts with the 'masters' and their guests. 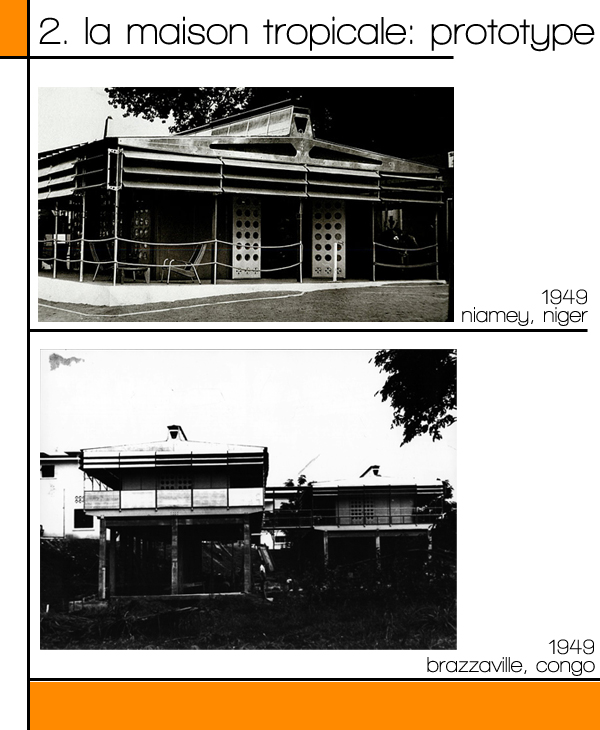 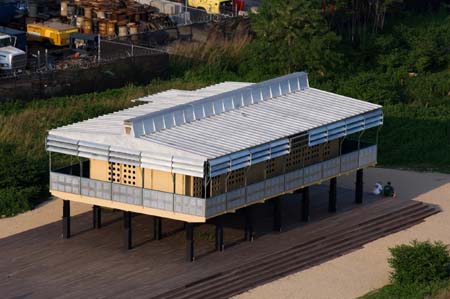 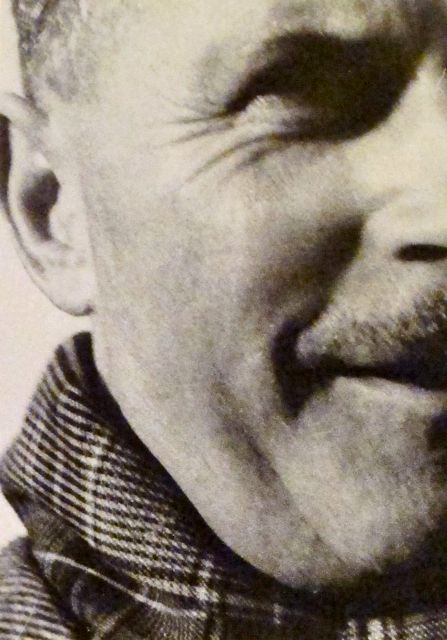 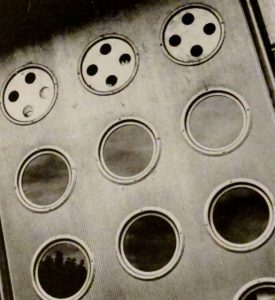 Segragation seemed an integral part of colonialism. So what about this cultural colonialism that now rules the Kanal arts centre? Anyone who even has the slightest notion of the Belgian and French arts history knows that they are totally different, for instance. The difference largely reflects the social reality of both countries. The culture of that tiny country called Belgium has always been closely linked to the position of the underdog, a culture of rebellion and obstructionism. Quite the opposite from Paris, that has always positioned itself as a power centre. The fact that leading figures of the Belgian art scene, from Wiertz to Magritte, were almost immediately expelled as soon as they presented themselves to the Parisian art scene, was far from accidental. How will the new arts centre deal with this fundamental difference in attitude? Especially if the Belgians stick to what they are really good at, as underdogs, revolt and obstruction, one can only hope for Pompidou that it learned its lesson from earlier attempts of Guggenheim New York in the same direction, and will work from the believe that the times of an easy global branding and Coca-Cola-Colonization of the art world are definitively over.
(mb)
http://www.kanal.brussels/