Will there soon come a time when robots will not just mimic men but also become their equals and even surpass them? The radically optimistic bad boy of Japanese robotics Hiroshi Ishiguro strongly believes that this future is closer than we might think, but other denounce his efforts to get there as total nonsense and deceiving.

Take Erica for instance. The semi-autonomous android, and the product of JST Erato, the most funded scientific project in Japan. Erica was already 23 in 2015, the year in which she was created. She still had the same age when it was announced earlier this year that she would become a news anchor on local television. And different from her human colleagues she will still look exactly the same when most of us are dead and gone. She's can run conversations of ten minutes per session, while she can also recognize voices and faces, and minuscule motors also allow her own face to have all kinds of expressions. According to her creator, Hiroshi Ishiguro, there's no doubt that she's 'the most beautiful and most humanlike android in the world'. 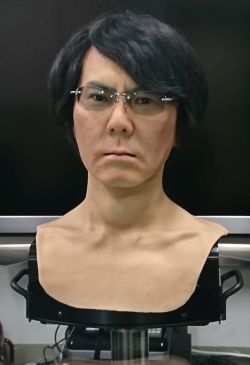 The 54-year old and somehow enigmatic Japanse robotics wizard leads the Intelligent Robotics Laboratory at Osaka University, and is the world's most famous maker of humanlike robots. As a child, growing up on the countryside near Kyoto, he was already a passionate painter, „because I was so interested in the human soul and wanted to represent it“. Once a student the same drive made him decide to dedicate his life to programming.In 2000 he created his first robot as a professor at Kyoto university. Two years later he presented his first humanoid, a look-alike of his five years old daughter Risa. Repliee R1, as the robot was called, got a mixed reception. Its capacities were still very limited, its movements clumsy, and even Risa didn't like him at all. But Ishiguro isn't the kind of man who gives up so easily. Since Risa he has designed some thirty more robots, mostly females. One of them, Geminoid F, became an actress in a traveling theatre play, and in 2015 she figured as the companion of a dying woman in the movie ‘Sayonara’.

But what made Ishiguro really famous were the robotic copies he made of himself,Since 2006, he has created five doubles, each time more advanced and more resembling, also because Ishiguro -with a typical Japanese sense of perfection- had some plastic surgery done to keep the resemblance with his artificial brothers while he was ageing. Their skin, complete with pores, is made from silicone, but their wigs were made from his own hair, colored in what looks like an artificial black. And the Geminoid HI-1 and his successors (named after gemini, Latin for twin) all wear exactly the same black clothes that have become his standard outfit. For Ishiguro, who looks like a Japanese version of Lou Reed in his later years- has some sense for showbizz and branding. 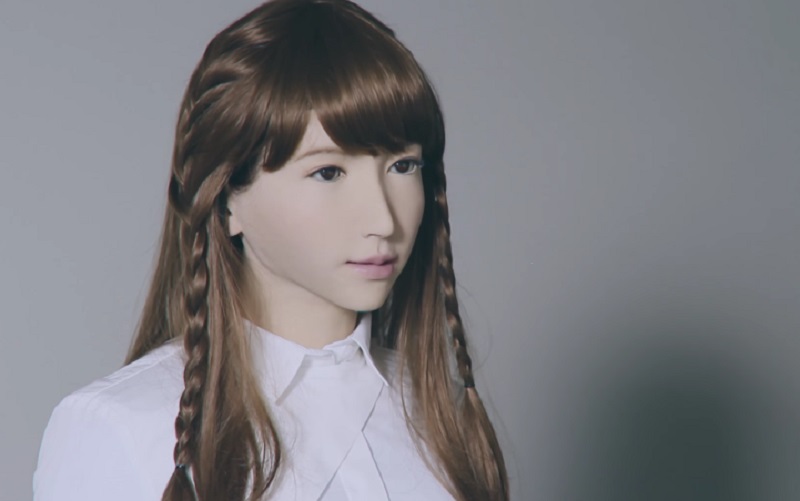 „I wanted to experience the sensation of looking in the eyes of my own image,„ Ishiguro explains his urge to create his own double, while referring to that typical Japanese notion of ‘sonzai-kan’, which means as much as 'human presence“.„I want to understand what it is to be human, catch my own 'presence', and find out who has my identity: me or the robot?“. Ishiguro is a pioneer in a relatively new crossover discipline: human robot interaction: the study of the relationship between man and machine, at the intersection of Artificial Intelligence (AI) and social sciences. Questions that stand central to this field are the causes that make men trust a robot, or develop feelings towards it. And in a society in which the lives of humans and robots get more and more intertwined, Ishiguro also aims to develop robots that are more and more equipped with human capacities. „Don't get me wrong: I care more about people than robots, „ says Ishiguro, „.Yet robots are the best way for me to study human behavior“. Ishiguro and his team try to find out what behavior and body language have a beneficial effect on people, what creates trust, or might enhance distance. „For human behavior is extremely complicated. Even a very subtle and almost invisible eye movement can make all the difference. When we equipped a robot with eye movement, it became immediately much more human“. 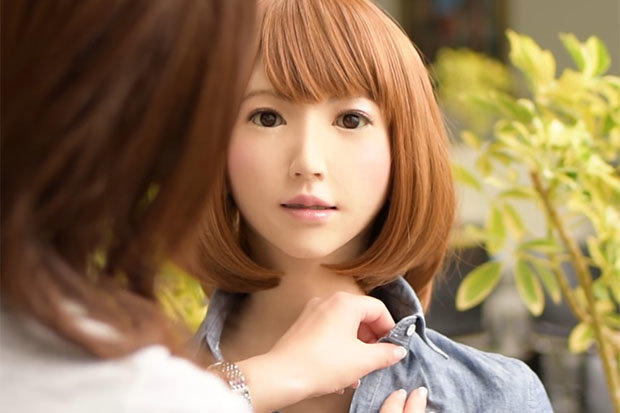 Meanwhile, Ishiguro also uses his twins for purely practical things, such as sending them around the world with assistants to give lectures, so hat he can stay in Osaka, and guide them from a distance. For his experiments have turned him into a worldwide celebrity., at times in which Artificial Intelligence has become the subject of an enormous hype. Experts agree that at the moment it is still utopian to create a robot that might even come near human intelligence, But that doesn't keep the likes of Ishiguro to dream of a robotic society, especially in Japan, where 28 pct of the 127 million inhabitants are older than 65, and the population keeps aging to such a degree that it is expected that by 2050, this percentage will already have passed 40. Japanese authorities strongly promote Artificial Intelligence as a possible answer to his gigantic demographic problem, and robots of all kinds have already become part of daily life, as a companion for the elderly for instance. One very popular example is Paro, a small robotic seal that is used as a support for the dementing, while Ishiguro's lab put its principles on the side to develop Telenoid, a robotic companion without age or gender, and not bigger than a toddler. „Elderly can project their fantasies on hem, „ says Ishiguro, „and it works wonderfully well.“ 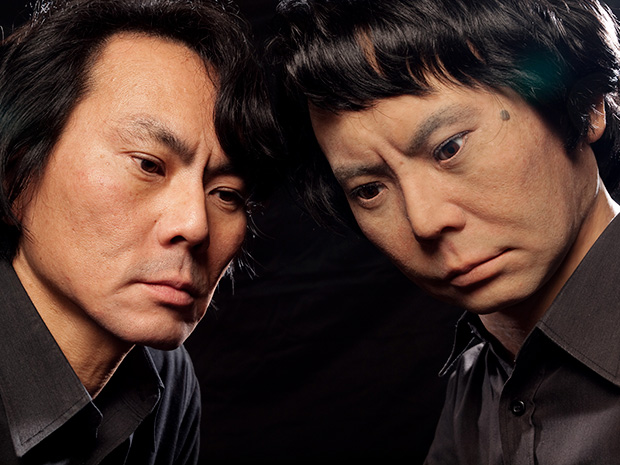 Ishiguro, who has been granted some 16 million dollar by the Japanese goverment for his research project. also mentions Shintoism, a religion that bestows a soul on non-living objects, as a major reason for a widespread acceptance of robots in Japanese culture. „We are an isolated country. We don't make a distinction between people and other things. And we don't think that a body of flesh and blood is a prerequisite to be human. We believe everything has a soul, whether human or not. So Erica has a soul. Like us.“

As the latest of Ishiguro's and his colleague Dylan Glas' creations, Erica resulted from a collaboration between Osaka and Kyoto universities and the Advanced Telecommunications Research Institute International. She's also the most advanced of Ishiguro's robots up till now. One of the most amazing things about her is her voice. She's can even tell robot jokes and has one of the most advanced speech synthesis systems yet developed. She can 'see' and react to her surroundings and track where people are in the room with the help of 13 infrared sensors.

Nevertheless, at the moment she only has 20 per cent of freedom, says Glas, which mostly limits itself to her upper body.

She cannot move her arms and legs, although in a famous documentary the android explains that people have assured her that one day she will be able to walk.‘ In that same documentary she also explains that she totally agrees with her architect, Ishiguro-sensei, whom she sees as her father: „I think, socially, I'm like a person. . But humans have this deep rooted need to feel themselves unique in the universe. They cannot accept that they would not be different from animals or machines. I will demonstrate that robots are much more than industrial or military machines of cold metal. We can be warm, loving and caring“.

For about three years now, Ishiguro and Glas have been working with Erica, getting the details done, and trying to give her a mind and personality, so that in the end she might do everything on her own. „That is really a big problem, „ says Glas, „And something most projects do not even try to solve, because it is so unsurmountable“. . But for Ishiguro, the sky is the limit: „I want to be one of the creators who change our life, and I want to change the world with robot technologies“. In his next projects, he will aim to provide his robots with even more human characteristics, such as desires, and even a consciousness of their own, although he has to admit that at the moment nobody knows how the latter should be done.

„He's a visionary, „ says Glas, „His mind jumps all over the place and we get to talk about some pretty crazy and deep concepts“. But Ishiguro and even the media that report on his creations -such as the Guardian documentary we already mentioned, and that comes with this post- are also heavily criticized, not in the least because they are said to give the impression that his androids can do a lot more than they actually can, and are therefore misleading and sensationalist. More importantly, Critics also argue that the premisses of Ishiguro's and Glas' research are completely obsolete, since to research Artificial Intelligence, we don’t need to develop an android, but an artificial brain, which could then develop its own container or body, and that it would come as a big surprise that this container would have even a resemblance of the human body. with all its limitations: Why give a robot only two hands while he can have hundreds, for instance? And why even provide robots with hands?

Some also argue that the next step in Darwins evolution and he only research that is useful today, would be in the field of augmented human beings and not in the field of androids, which in their simplicity and purely technological and chronological thinking will never be able to capture the complexity and networked simultaneity of the human brain or anything natural. The future would reside in organic computing and DNA storage of data: imagine plants becoming our computers and able to store all data. That could also put an end to our environmental problems. 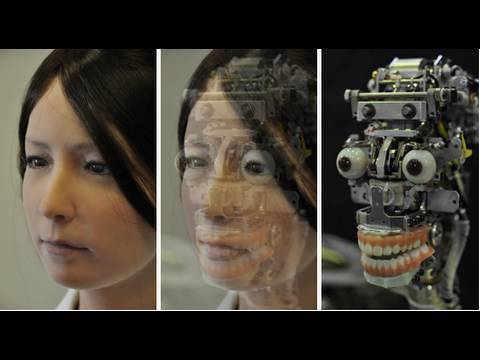 Already in the seventies, the Japanese roboticist Masahiro Mori developed the paradoxical idea of 'uncanny valley', which states that humanoid objects which appear almost, but not exactly, like real human beings will mainly elicit uncanny or strangely familiar, feelings of eeriness and revulsion in observers, because the latter mainly focus on these differences. Or in short: a robot will remain a creep, as long as he or she is not perfect.

One could also question, despite their ability to tell jokes, the capability of robots to develop a sense of humor, irony, and relativity, And what would the future be without these qualities? But Ishiguro, who loves to provoke, and has the media on his side, doesn't agree . Both he and Glas regard themselves as artists more than scientists, and the Erica project as a philosophical one as much as technological one. „For years now, I've been studying the reactions of humans on new technology, and I can tell you: everybody loves to have a conversation with a robot,“ says Ishiguro, „A robot who looks like a zombie, that's creepy, But not our humanoids. Our main concern is to redefine what it means to be human. And only when robots are designed to the image of man, will we also learn how to interact with them“.

„What does it mean to think?“ Glas continues, „What is human creativity? What does it mean to have a personality? What is a minimal definition of humans. What are the patterns that underlie human interaction? Only when we can answer these questions, will we also be able to implement them on robots. A next challenge is also to get the robots out there, into the real world, and get them interact with us, so that we can also explore what we really want from them. Maybe a robot is not a machine, or a thing. Maybe we will find out that it is new ontological category, for which we don't have the right words to describe yet“.