PETRI, TURKHEIMER, NUTT AO. : THE EFFECT OF MAGIC MUSHROOMS ON THE BRAIN.

These visuals each show the relationship between different parts of the brain, under quite different circumstances. On the left hand side is an fMRI scan of someone given a placebo, on the right of someone injected with psilocybin, the active ingredient in magic mushrooms. While the brain activity on the left is perfectly normal, on the right regions of the brain that don’t normally communicate are doing so. According to the study authors, who published their findings in the Proceedings of the Royal Society Interface, this map of the hyper-connected brain might suggest evidence of synaesthesia - sensory mixes that allow oversaturated colors to be tasted and sounds to be seen. The scientists also expressed the hope that one day these visualization of brain networks could also be useful to help treat depression. (mb) 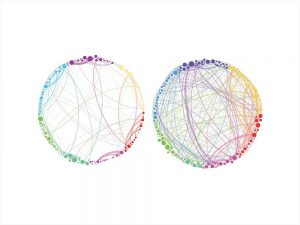