ON MAPPING AND FLAPPING

The magazine served as a catalogue to the Mapping The Design World exhibition at the Meeting Point of Reciprocity, the Biennial (now Triennial) on Design and Social Innovation in the city of Liege, Belgium, in Oktober 2012. 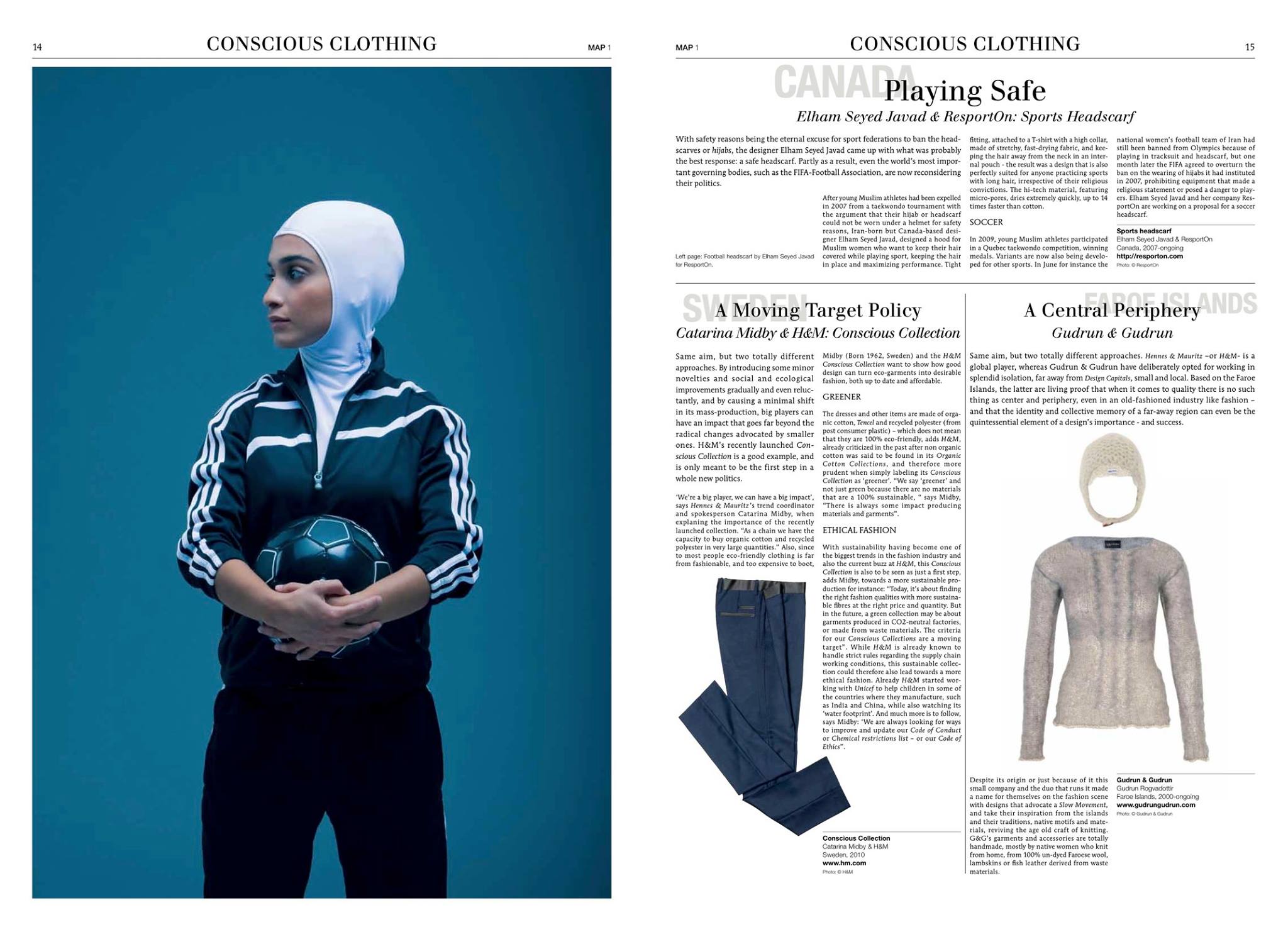 The Meeting Point was meant to be more than just a place where visitors could meet and greet, and find out about RECIPROCITY’s programme. As a platform for Mapping the Design World, and as a Think Tank, laboratorium, and memory box, it also offered an insight into what would be the Biennial’s central focus in the years to come: social innovation. Curated by Max Borka, and highlighting a multitude of activities, it tried to answer the question ‘What is social design?’ , while offering a taste of the richness that characterized the rapidly growing number of projects in the field.

Visitors were invited to reflect on how these examples could impact on their own life, and that of Liège, a city re-inventing itself through a series of large-scale schemes. Last but not least, the platform also tried to make clear that – far from being the result of a marketing strategy – the Biennial's decision to focus on social design was born out of need, and the strong belief that if design still wanted to make any sense, it would have to get social. As one of the engines of the Industrial Revolution on the European continent, Liège had also been at the cradle of design as we had known it over the last two centuries. It therefore seemed logical that, now that post-industrial times had come, Liège also pioneered its future. 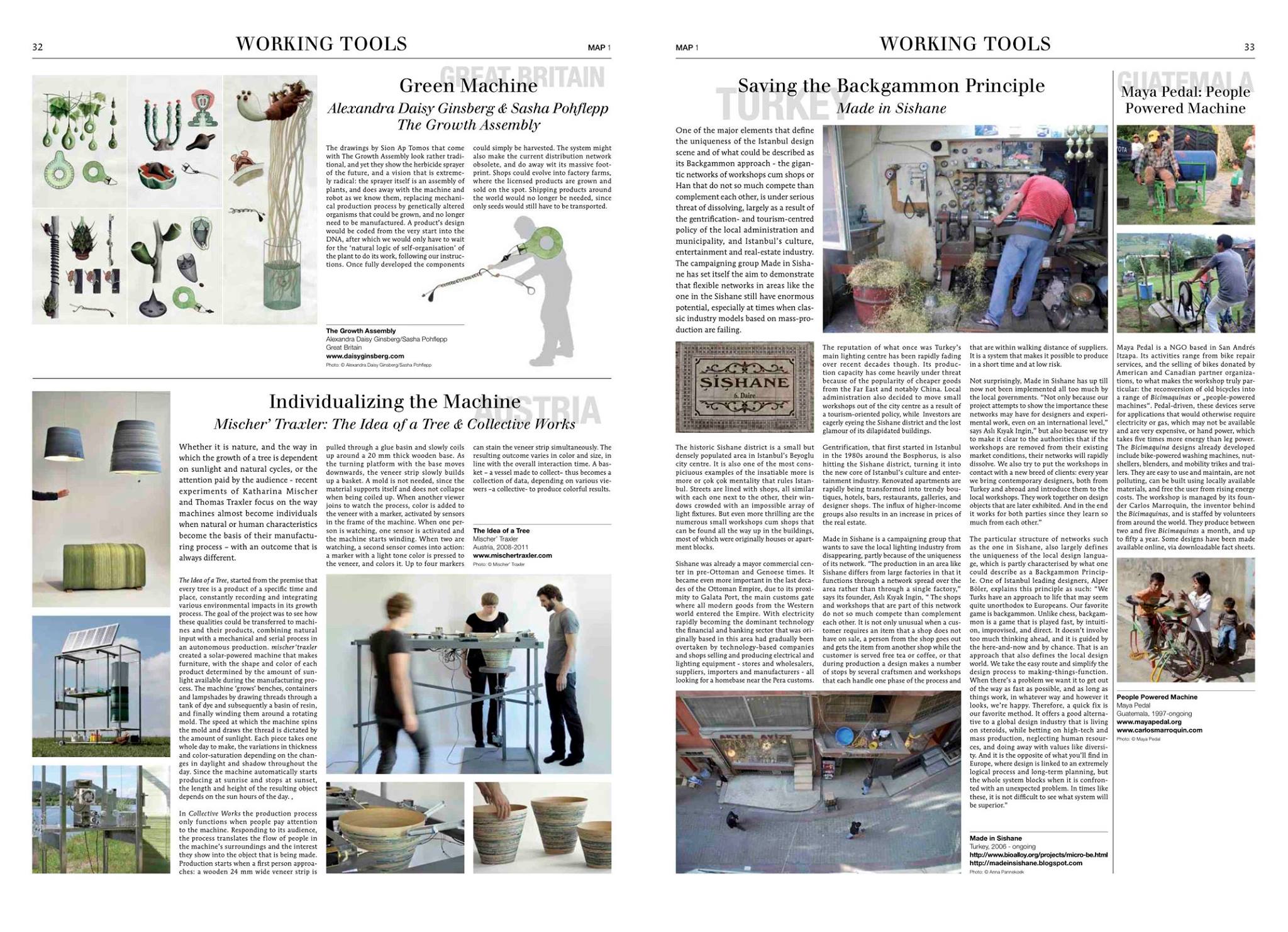 The starting point for Mapping was to show 100 projects from an equal number of lands, with a clear preference for those countries largely off the conventional design radar, such as Afghanistan or Zambia. Positive discrimination also determined the selection of an average of one project per country, giving the same value to inconspicuous places like the Faroe- and Lofoten Islands as to the USA, Russia and China. Finally, rather than going for the most important project in each country -  reducing the innumerable emergency shelters or schools developed for third world countries – Mapping took a more panoramic view. In ever widening circles, the overview went from Body and Home, over Work and Play, and Communication and Mobility, to Urban and Global Politics, Although some detours took place on route, the final destination followed the initial plan, resulting in a deformed image of a topsy-turvy world that offered a life-affirming compensation for the equally distorted images we are usually confronted with. 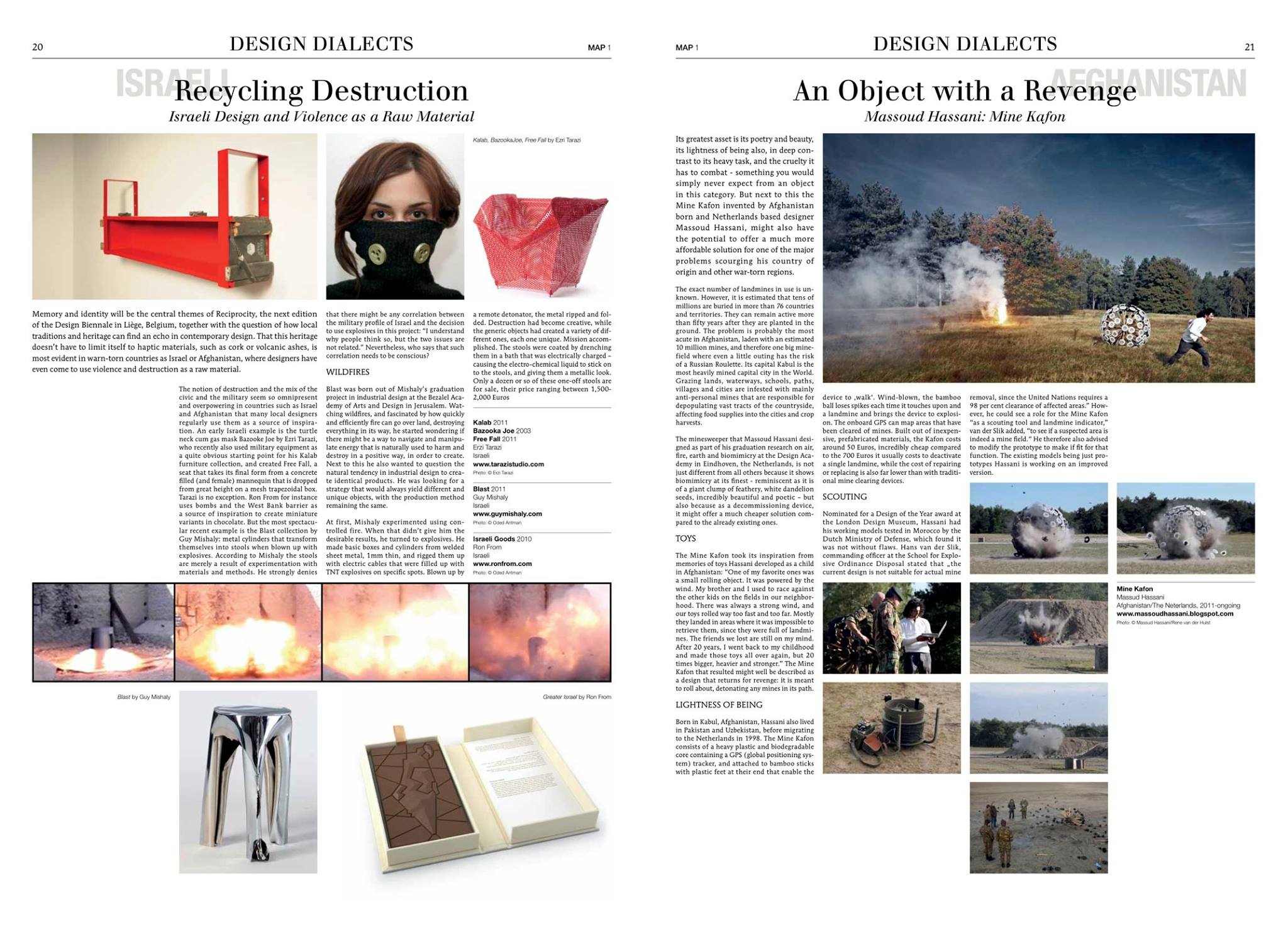 The outcome made no claim to be representative or exhaustive.  Instead, it was meant to be a selection that suggested the endless range of strategies, and the extraordinary dynamics with which these possibilities were being exploited; an imaginativeness, enthusiasm and even joyfulness that totally refuted the cynicism, despair and dreariness that often accompanied social design.

Working in diverse realms, which were often hardly connected, the order of battle of the strategies in the exhibition was scattered: eco design, sustainable and experimental design, critical-, political- and radical design, anti-design, up cycling and recycling, re- this, re-that, re-whatever. Their goals and methods differed greatly. And yet, what binded them seemed stronger: a mutual striving for what in an ideal world every form of design should take as its main goal, namely the interests and well-being of society as a whole, and not just those of one particular group, let alone exclusively the interests of corporate industry. Each in its own way had also raised rebellion against the tyranny of what was -and still is - proclaimed to be good design by consumer society: slick, glamorous, luxurious, or simply practical objects of desire, good-looking and highly seductive, but also lethal and perilous — ‘formes fatales’ that promise heaven, but are a one-way ticket to its antipode.

Parallel to generic design’s global explosion and implosion on a semantic level, other fundamentals were causing a worldwide crisis, which even the most hard-core could not ignore. This ongoing turmoil played directly to the Biennial’s theme, the relationship between design and memory: in its eternal celebration of the new, design suffered from an innate Alzheimer, the catalogue stated. The logic of permanent renewal that had to guarantee a return of investment also resulted in overproduction, a programmed obsoleteness of goods, and a market that was oversaturated — the only way out: conquer new territories. Not only did this have disastrous consequences in terms of working conditions or waste, with design being an offspring from the West, but it has also wiped other cultures away entirely, erasing their memory and identity.

All along this process, the last word in the magical formula Form follows Function had expanded to Finance & Fashion, Fun, Funk & Fuck, Fiction & Friction, or Fury & Fairy. As the title of this exhibition and magazine implied, other F-words urgently had to be added and replace them, such as Famine, Favela, Fai-da-te, Fragility and Foco or Foquismo, the ideology that grew out of Che Guevara’s premise that a small group of dedicated people could set off a revolution based on a hit-and-run guerrilla strategy. 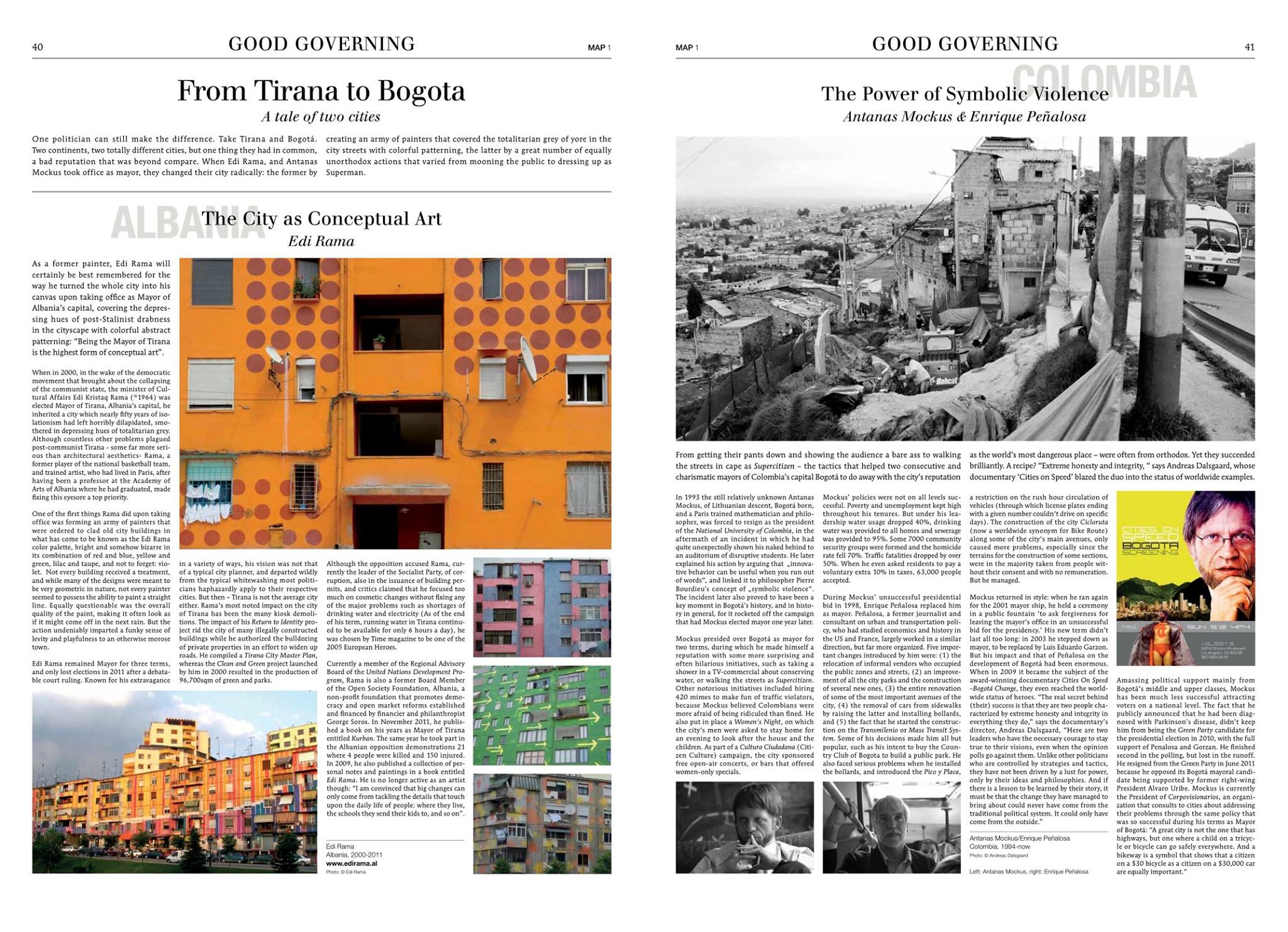 By nature, and in opposition to the power game of corporate industry, most of the initiatives highlighted in the exhibition were small to humble. What they proposed might also come far too late, their effect hardly exceeding that of the proverbial drop of water on the proverbial hot plate. And yet: the power of social networking alone often raised their impact far beyond the local level, making them not unlike Edward Norton Lorenz’ butterflies, which could alter the path of a tornado in Texas by flapping their wings in Brazil. „Useless as they may be in isolation,“ the magazine stated, „Imagine what would happen if they started to do so together“. Mapping aspired to be a catalyzer that helped synchronize all that flapping.

The graphic design of the Magazin was done by the German Fremdkörper studio. At the Reciprocity Biennial, the magazine was freely distributed to the visitors. Few copies remain. Yet you can read a full pdf of the publication over here. (mb).