Good design is often little more than a comforting lie. The lasting success of one of the most iconic maps ever, Henry Beck's London Underground Map was only there to proof it. On the designer as an illusionist.

Even to laymen the Tube map which Henry Charles Beck (1902 – 1974) designed for the London Underground almost a century ago hardly needs any further introduction. Although Beck created it in his spare time and uncommissioned, while working as an engineering draftsman at the London Underground Signals Office, and despite of the fact that it was only hesitantly introduced by his employer in 1932, it became an instant success, and is essentially still in use today. It's influence can also hardly be underestimated, and it is still recognized across the globe as one of the most iconic maps ever created.

Beck based the map on the circuit diagrams he drew for his day job, stripping the sprawling Tube network down to basics. The result was an instantly clear and comprehensible chart, as simple as it was imaginative and stunning. In the years before, the London Underground had already issued maps on which all the stations, contrary to reality, were more or less equally spaced - toying with the idea that passengers riding the trains were not too bothered about the geographical accuracy, but were more interested in how to get from one station to another, and where to change. But Beck radicalized this idea, with a diagram that looked more like an electrical schematic than a true map drawing. And he also introduced the idea of creating a system that would fully exploit the symbolism of colors.

The rest is history: when Beck first submitted his idea London Underground felt initially sceptical of his proposal Only after a successful trial production of 500 copies in 1932, it was given its first full publication in 1933 (700,000 copies). The reaction of the customers was after only one month a large reprint was required. Beck's map became THE essential guide to London, to such a degree even that it obliterated any other vision on the city. Polls still show that most Londoners think of the River Thames as straight, and Waterloo station as being south of the Houses of Parliament, while in fact reality it is the opposite. Beck's revolutionary design, with certain modifications and additions, survives to the present day and, although updated several times since, the core is still there. It also became a template for transport maps the world over.Its success was clear proof that what is considered to be good design doesn't depend on the way it succeeds in reflecting reality accurately, but on the contrary, distorts the real, and serves this comforting lie and illusion convincingly.

All this must also have played at the back of David Shrigley's mind when he created his own version of the map in 2005. Commissioned under the auspices of the Transport For London’s Platform for Art initiative, as the third in a series of artworks that celebrated and re-interpreted Beck’s map, the internationally acclaimed British artist created an abstract tangle, made up of the same colored lines used on the Tube map itself, but serving them up as a simple chaotic scribble and a big plate of spaghetti. 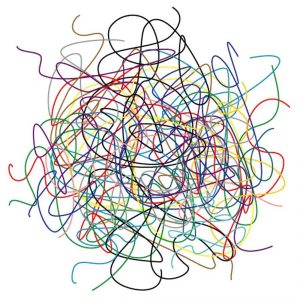 In this bright, anarchic and humorous interpretation Shrigley subverted the reassuring order of the Underground map and turned it into a wriggling, teeming fiesta, echoing the absurd confusion of one of his comic characters when confronted by an extensive travel network- stressing the already abstract character of Beck's map by taking it one step further until it did not relate to anything. While the original masterpiece of information design could be safely found on the reverse, its chaos much more closely portrayed what it felt like to use the London Tube in 2005, Shrigley said: a daunting esoteric experience. More artists have created their own version of Beck's map since then, while Shrigley also did some other work for the London Underground, but none of these pieces left such a lasting impression. (mb)