On July 18 it will be a century ago that Nelson Mandela was born in Umtata, then part of South Africa's Cape Province. On December 5 it will be exactly 5 years that he died in Johannesburg. This series of posts on our blog explores how artists and designers celebrated the legacy of the South African leader, turning a man into an icon. This post highlights one of the most famous photographs of Mandela the icon, taken by Ian Berry.

The image shows supporters playfully climbing to every vantage point of a billboard whilst awaiting the arrival of Nelson Mandela in a Natal township in South Africa. The billboard shows his giant face, torn but very recognisable. No words are needed. Even physically the man is no longer there. He had already become an icon, pure image. (In fact, other photographs show that there was a text on this election poster, next to the portrait. It said: 'Vote for Jobs, Peace and Freedom'. But it's been cut off by Berry). The supporters look as if they might defend the billboard against those that might think differently. And at the same time it offers them strength and identity, be it only because of the sheer size of that portrait, showing a terrorist that had become a white-collar and grey-haired statesman, the Father of the Nation, wise and confident. 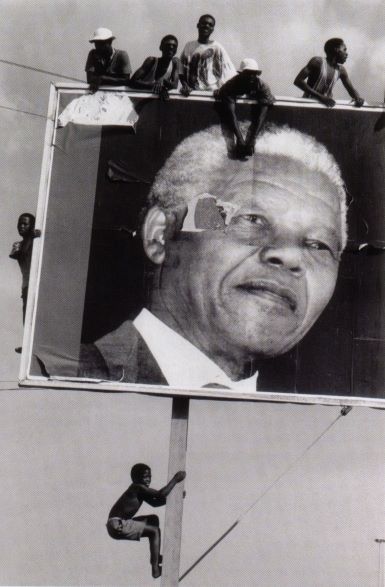 The picture of the billboard, a perfect illustration of how design can give a helping hand in creating mythology

The picture of the billboard, a perfect illustration of how design can give a helping hand in creating mythology, was taken in 1994. That was the year in which an overwhelming majority chose Mandela and his African National Congress (ANC) party to lead the country, and he was sworn in as the first black president of South Africa – four years after he was released from 27 years of prison, and one year after he received the Nobel Peace Prize. Ian Berry first set out for South Africa as a boy of seventeen and thus began a career of recording ordinary lives in extraordinary circumstances: the duty to ‘live apart’ while occupying the same space. Present at the Sharpeville shootings in 1960, Berry has returned to South Africa many times in the course of the succeeding decades and captured many of its most significant moments, including the 1994 election and its remarkable aftermath. © Ian Berry/Magnum Photos.See also: https://www.ianberrymagnum.com