On July 18 it will be a century ago that Nelson Mandela was born in Umtata, then part of South Africa's Cape Province. On December 5 it will be exactly 5 years that he died in Johannesburg. This series of posts on our blog explores how artists and designers celebrated the legacy of the South African leader, turning a man into an icon. This post highlights Release, one of the Mandela monuments created by Marco Cianfanelli.

Release is a monument that marks the site in Natal Midlands where Nelson Mandela was captured by apartheid police in 1962 and sent to 27 years of prison. It was created by Marco Cianfanelli and built in 2012 to commemorate the 50 year anniversary of the arrest.

The monument spans 50 steel columns of varying width, each anchored to the concrete-covered ground: Their number is representative of the 50 years that had gone by since Mandela had been put behind bars for his efforts to bring equal rights to the once racially divided nation. And their appearance also suggests a bunch of jagged bars. While each of the columns stands on it own, together they create -or 'release'- the illusion of a flat image, Mandela's very recognisable profile, when looked at from a very specific angle. 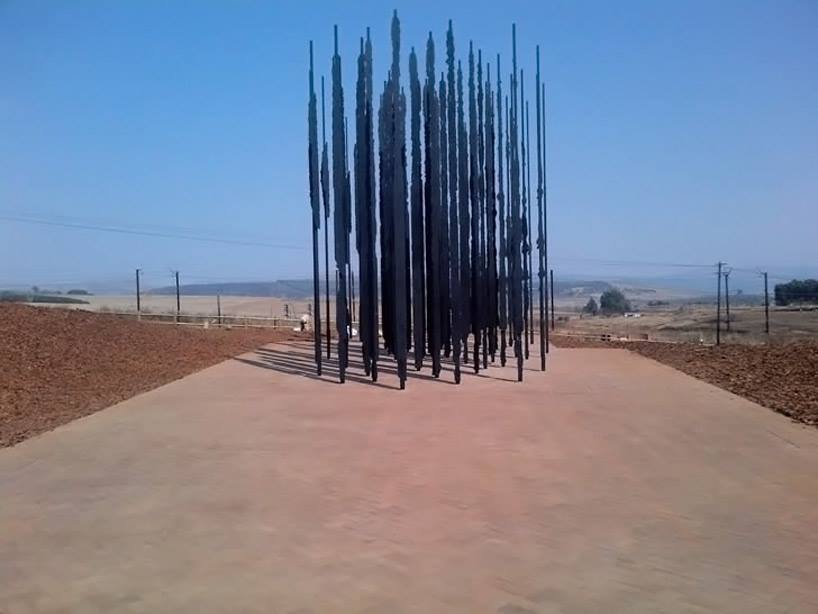 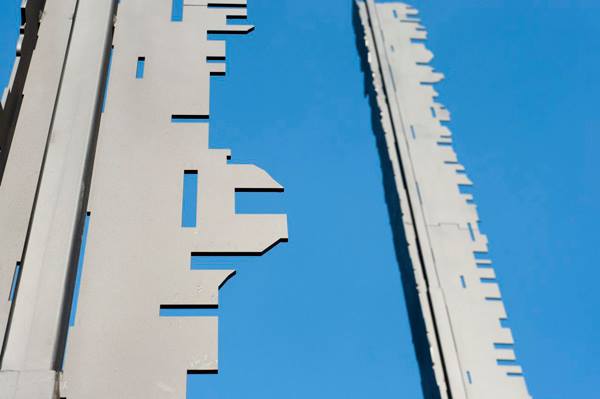 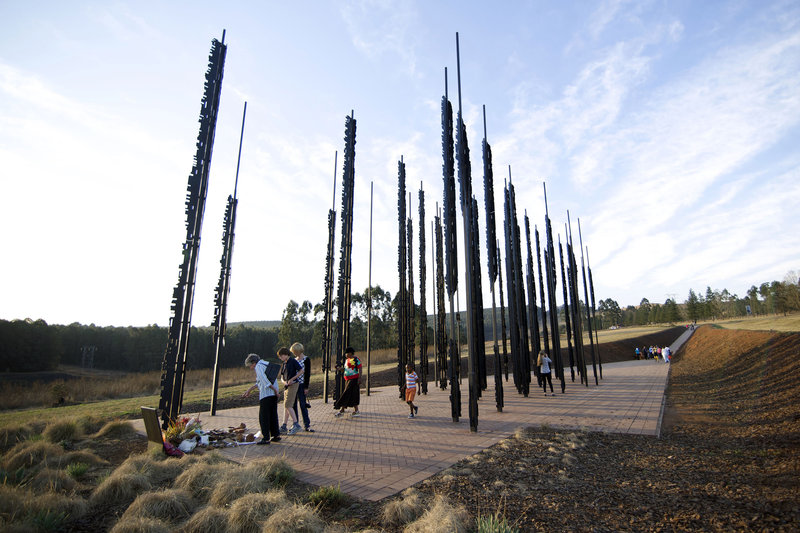 The image only comes into focus when approaching the site down a long paved path that leads to the sculpture, a 200 meter path that represent Mandela's 'Long Walk to Freedom': Seen from anywhere else, the design and arrangement of the columns deliberately aims to invoke a sense or moment of fracture, says Cianfanelli, who further comments:: „The 50 columns (...) also suggest the idea of many making the whole; of solidarity. It points to an irony as the political act of Mandela’s incarceration cemented his status as an icon of struggle, which helped ferment the groundswell of resistance, solidarity and uprising, bringing about political change and democracy”. 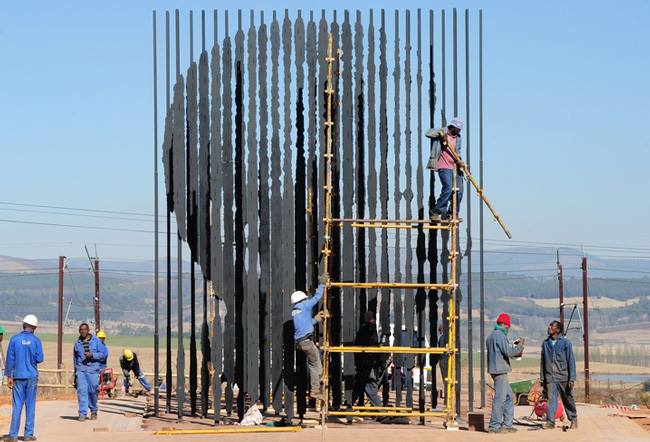 Marco Cianfanelli (1970) was born and lives and works in Johannesburg, South Africa. In that same, between Chancellor house and the Johannesburg Magistrates court on Fox street,he also created the nearly six meters tall and arresting pop-style sculpture Shadow boxing, which derives its imagery from a 1952 photograph of Nelson Mandela, sparring with Jerry Moloi. 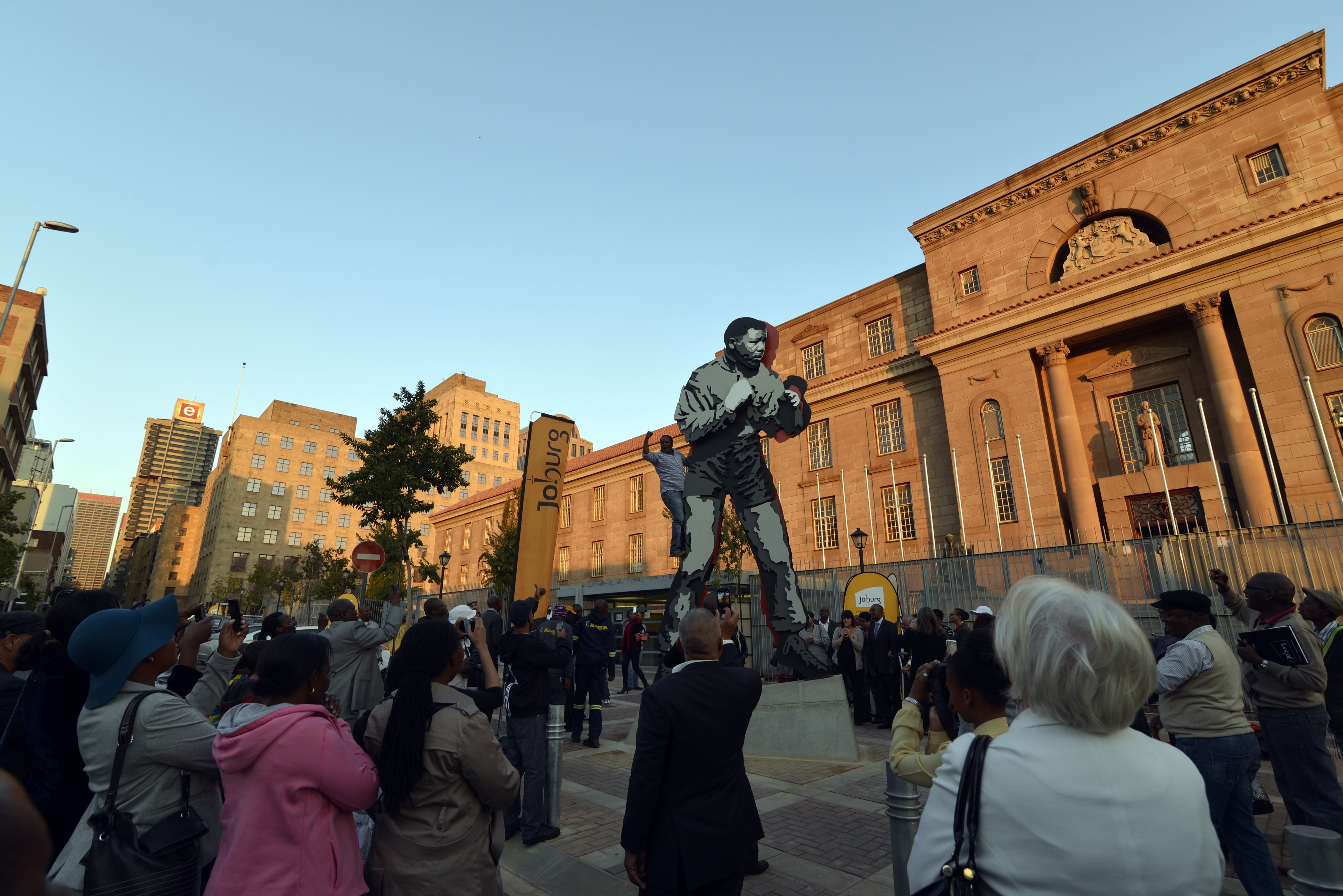 The concrete plinth that supports the sculpture of the boxing Mandela is embossed with his words: “In the ring, rank, age, colour, and wealth are irrelevant”. Again, the 2-dimensional image is rendered in 3-dimensional steel plates, laser cut and layered, creating a very interesting interplay on opposites, such as reality and perception.It also raises questions, such as: what makes an icon or myth? Is ot the many or multitude? (mb)