Skip to content
Max Borka
Home » Nelson Mandela » COMMEMORATING MANDELA (4) – FREDDY SAM : ‘I AM BECAUSE WE ARE’
Just in case

COMMEMORATING MANDELA (4) - FREDDY SAM : ‘I AM BECAUSE WE ARE’

On July 18 it will be a century ago that Nelson Mandela was born in Umtata, then part of South Africa's Cape Province. On December 5 it will be exactly 5 years that he died in Johannesburg. In the next few days a series of posts on our blog will highlight how artists and designers celebrated the legacy of the South African leader, turning a man into an icon. This post highlights 'I Am Because We Are', a giant mural in Johannesburg, by Freddy Sam.

Street art tribute pieces for Nelson Mandela have been popping up all over the world, especially after his death, but the fact alone that this mural was 10 stories high made it stand out from the rest. Like the other works highlighted in this series of posts, it is a king-sized tribute which -because of its size- is totally in tune with a giant of a man whose aura was so much larger than life.

South African and Cape Town-based street artist Ricky Lee Gordon, aka Freddy Sam, created this mural in the inner city of Johannesburg.The 40 Meter and ten-storey tall painting of Madiba or Nelson Mandela was commissioned by the Maboneng precinct as a gift to the city. The mural and its title were inspired by Madiba’s definition of the African Ubuntu concept: ‘You cannot be human all by yourself’.

Street art tribute pieces for Nelson Mandela have been popping up all over the world,

Freddy Sam chose to recreate an iconic 1952 photograph by famed Bob Gosani of a young Mandela in a boxing stance, and sparring with Jerry Moloi, as Mandela believed all were equal in the ring and the wall on which the graffiti was to be painted was not far from the rooftop where the original image was taken. It is the same image that served Marco Cianfanelli as a source of inspiration for his giant and arresting pop-style sculpture Shadow Boxing, standing between Chancellor house and the Johannesburg Magistrates court on Fox street (see an earlier post).

Mandela and Tambo Attorneys, the first black law practice in Johannesburg, was originally opened in Chancellor House in the 1950’s. Now renovated, the building became a heritage site and a museum. Gosani’s photograph was exhibited in its window, and it was Cianfanelli’s encounter with this window display, that captured his imagination. „I did not enjoy the violence of boxing so much as the science of it, Mandela wrote, on the subject of boxing, „I was intrigued by how one moved one’s body to protect oneself, how one used a strategy both to attack and retreat, how one paced oneself over a match.” Many still see that attack and defence stance, and the way in which Mandela mastered as the main quality that would turn him into the last national liberator of the 20th century. 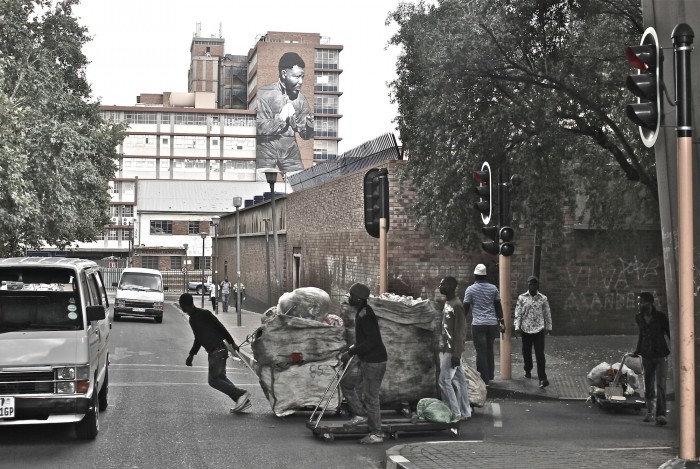 The mural in Johannesburg took Ricky Lee Gordon 4 days to complete in 2013 just after Madiba’s passing and was almost completed on the day of his funeral, with only a few touch ups to do, when the storms and winds came down and the window washer that served Freddy Sam as a support broke. Completion was therefore delayed to 2014. /mb)
Images mural (c) Ricky Lee Gordon and Bheki Dube. Original photo by Bob Gosani © BAHA foundation.