On July 18 it will be a century ago that Nelson Mandela was born in Umtata, then part of South Africa's Cape Province. On December 5 it will be exactly 5 years that he died in Johannesburg. This is the fifth in a series of blogposts which explore how artists and designers celebrated the legacy of the South African leader. The post highlights the tribute which is probably the most celebrated: 'Portrayal of Nelson Mandela, Liberated', a monumental portrait by the Belgian-born American artist Jan Beekman, which prominently hangs in the United Nations headquarters in New York.

The portrait that Jan Beekman (1929) painted of Nelson Mandela also occupies a unique and prominent position in his work. Although Beekman had been praised as an excellent portrait painter when young, he did not paint portraits in his long professional career. His work almost invariably takes the natural world as a major source of inspiration. Over the last few decades, his paintings have been particularly focusing on his immediate surroundings, the woodlands of rural Southeastern Connecticut, where he has been living since 1997, the year he became an American citizen. 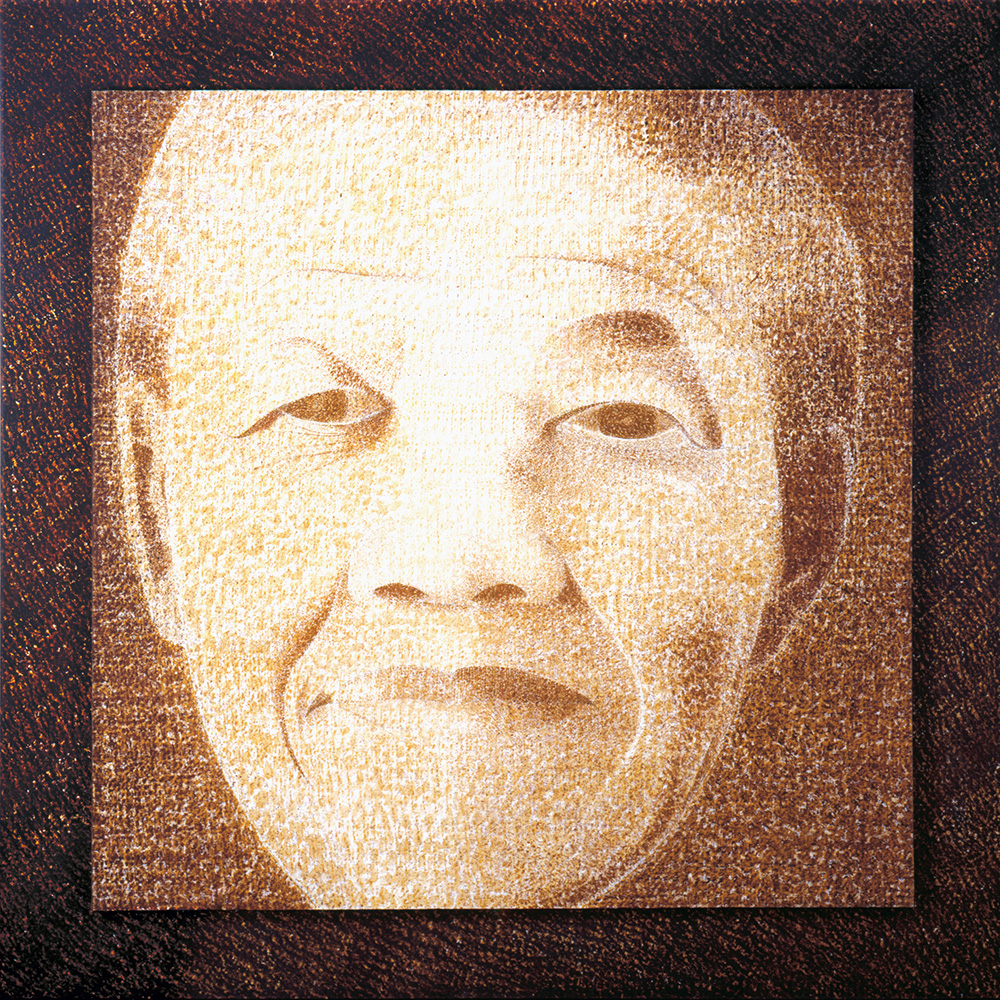 As a local critic described them: „There are the grays, browns and muted yellows of the winter woods outside his home near the Preston-Ledyard town line. There are the sweeps of earthy reds from the buttes of the Southwest and repeated dabs of inky green and blue that suggest a bubbling, springtime river in New England.“ Although the work also raises questions about the consequences of our manipulation and pollution of our natural resources, figurative elements even occur occasionally in these landscape paintings, which are abstract meditations.

It shows a face that touched him so deeply that he had to create 15 small portraits before finding the tones and technique to convey its expression adequately.

There's one exception though, which Beekman himself considers to be so important that he has said that, if he were to be remembered for one single work, it should be this portrait. It shows a face that touched him so deeply that he had to create 15 small portraits before finding the tones and technique to convey its expression adequately. It is the face of Nelson Mandela, who was to become the first democratically elected president of South Africa, as he appeared live on television on Feb. 11, 1990, the day he was released from Victor Verster prison. The Nobel Prize winner was 71 and had been imprisoned for 27 years by the white-controlled South African government for his work with the African National Congress liberation movement and its fight against apartheid.

Jan Beekman and his British wife, Gillian Lane-Plescia, who had moved to United States after Beekman became the artist-in-residence at the University of Michigan in 1982.were living in Chicago at the moment of Mandela's release, where they had not only made friends in the black community, but had also become strongly involved in the black South African people’s struggle for liberation. The couple still remembers as it were yesterday how they rose at 4 a.m. to watch the televised coverage of the event: “The very moment when Mandela literally stepped out from the dark into the light – in a flash - was so overpowering that the memory of it can still bring me to tears, “ says Beekman. “It caused an outburst of emotion that has also become the subject of the painting.”

Beekman, who would never meet Nelson Mandela personally, but calls him the greatest leader of the 20th century, says he was particularly struck by his calm, peaceful demeanor amid the hundreds of thousands of cheering, exuberant supporters as well as the riot police, who had difficulties in controlling the raucous crowd that had gathered to hear Mandela speak. “He came out of prison like a stone,” Beekman remembered.

What he saw, Mandela’s calm, is also what the renowned artist immediately felt compelled to capture to capture on canvas - „ this serene smile, this endurance, his positivity in the face of it all. There was despair, but also hope“.

So Beekman began working. Over the course of three years, he toiled, creating and building on ideas until he developed the final version.“The problem was to get from a very realistic portrait to something that was artwork,“ he says, „I wanted the painting to be a portrait of hope, an anti-racist statement also, and a tribute to our origins, the continent where we all come from, Africa.” Finaly, in 1996, his efforts culminated in a 6-foot-by-6-foot monochromatic work in tones ranging from sandy beige to deep brown. Stand close to the portrait and the heavily textured brushstrokes and paint daubs in greens and blacks appear to be one of the more abstract landscapes. Take a few steps back, however, and Mandela’s face, with its calm and soulful eyes, takes shape. “My paintings are very textural and so is this portrait,” Beekman says.

Because the painting represented such a personal moment, Beekman put the brown and tan oil on canvas aside in his studio for another 10 years, never including it in an exhibition, considering it too delicate to be exposed to the public. Thus it remained relatively unknown, except to those visitors who came to his studio: „People wanted to buy it, but I would not sell it. The emotions were too strong, and I did not want it to end up in a private collection. When an art historian saw the portrait in Beekman’s studio, however, she was so impressed that she persuaded him to begin the process of donating it to the United Nations through the Belgian mission and the Beekman Foundation, which administers the artist’s works. „The United Nations’ mission to work for world peace, human rights, justice and individual dignity made it the perfect place to display the portrait of aman who dedicated his life to ending the political and social system of apartheid,“ Ms. Lane-Plescia says.

The portrait was officially and quite symbolically unveiled at the UN headquarters on the day that South-Africa assumed the presidency of the UN Security Council for the first time ever. Hanging prominently next to the General Assembly and the Security Council chamber. It is the only portrait of a national president in the UN building and the only painting of a living person other than the living ex-secretaries.general. 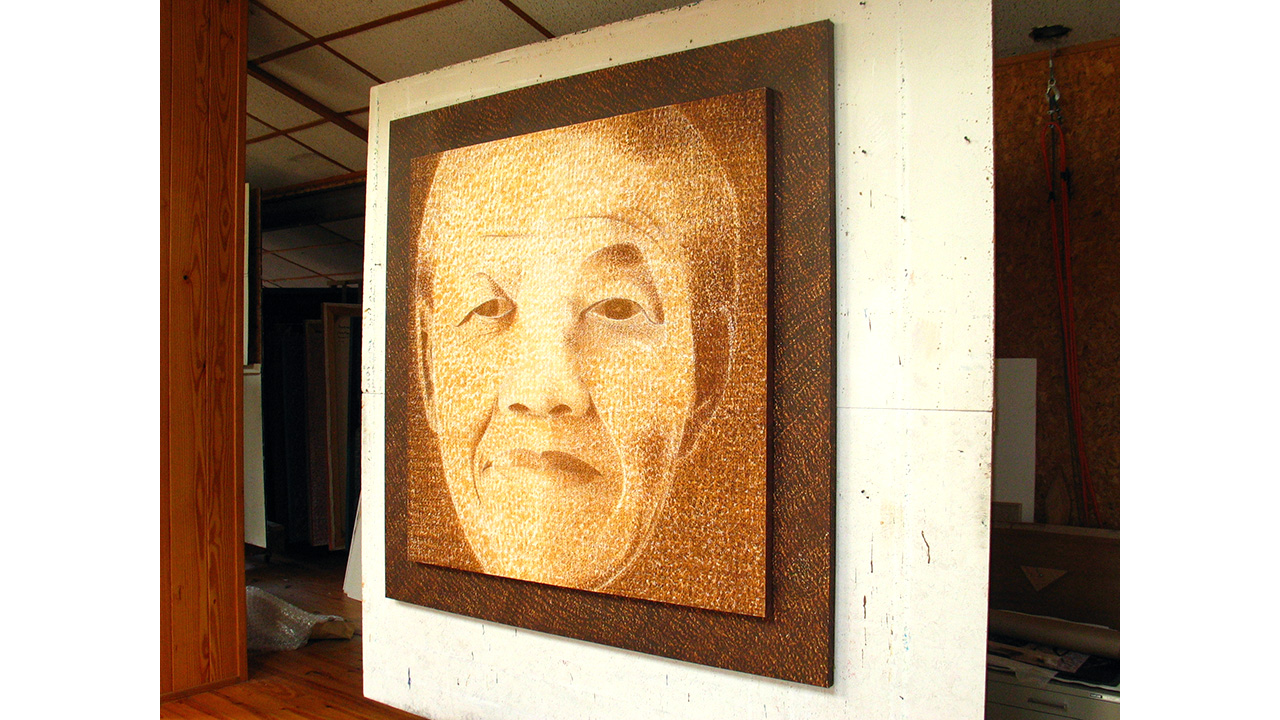 Apart from a portrait of the South-African leader, and a portrait of peace and hope in general, 'Portrayal of Nelson Mandela, Liberated' could also be seen as a metaphor for so much else, maybe for Beekman's personal liberation, and surely for the act of painting itself, the moment when -„in a flash,“ as Beekman remembers this moment when Mandela stepped into freedom- shapes that step from darkness into a crushing light, instantly and gradually revealing the balance that also rule his landscape paintings.