A new mural by Banksy was unveiled in New York last Thursday, protesting the imprisonment of the Turkish-Kurdish artist and journalist Zehra Dogan. 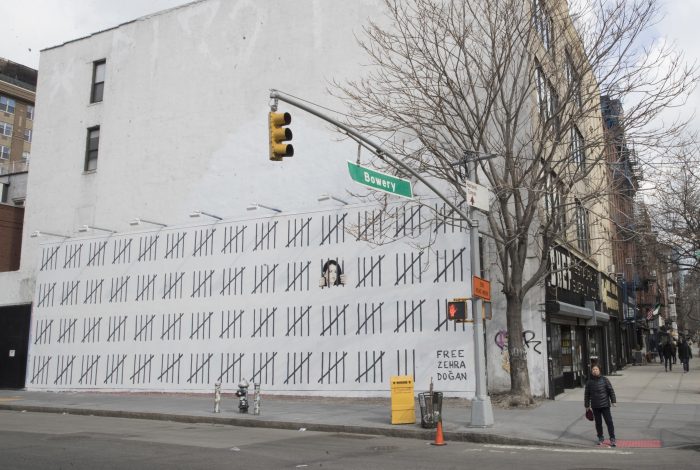 Ms. Dogan is currently serving a two-years and 10 months jail sentence in Turkey for one of her paintings, depicting the destruction of a Kurdish town, with Turkey’s flag flying over rubble. The 70-foot-long yet sparse mural by Banksy on the corner of Houston Street and the Bowery mostly consists of black hash marks for each day of Zehra Dogan's incarceration, which began in March of last year. The tall marks also represent jail cell bars. The head of Ms. Dogan herself is shown trapped behind one set of marks, with her left hand gripping a bar that doubles as a pencil. “Free Zehra Dogan” is written in the bottom right corner of the mural. Ms. Dogan still has 18 months left to serve, and remains unaware of the mural, according to a news release. Banksy's piece was done in collaboration with the graffiti artist Borf, who also spent time in jail for his work.

"... imprisoned for painting “Turkish flags on destroyed buildings, Ms. Dogan’s original painting was projected above the mural, an act which will be repeated each night"

On Thursday evening, Ms. Dogan’s original painting was projected above the mural, an act which will be repeated each night . The painting was based on a photograph of the Kurdish town of Nusaybin, which was partly destroyed in 2015 during fighting between the Turkish army and Kurdish militants. Zehra Dogan was arrested after posting the watercolor on her social media. The artist wrote in a now-deleted Tweet that she was imprisoned for painting “Turkish flags on destroyed buildings.” She was charged with being connected to the Kurdistan Workers’ party, which has been battling the Turkish president, Recep Tayyip Erdoğan. 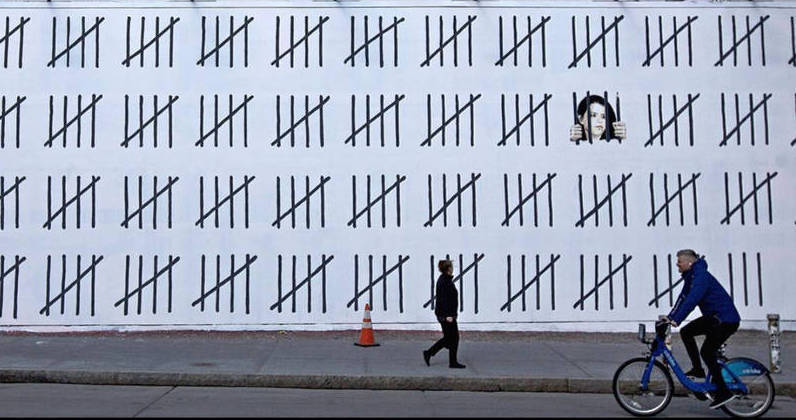 According to human rights advocacy group PEN International, Dogan was convicted of “propagandizing for a terrorist organization.” It says Dogan argued at her trial that painting a real-life event based upon a photo taken and disseminated by the Turkish military was part of her work as a journalist. Banksy shared an image of the mural on his Instagram with the hashtag #FREEzehradogan, writing “Protest against this injustice by regramming her painting, and tagging Turkey’s President Erdogan.” First painted by Keith Haring in 1984,The Houston Bowery Wall is one of the city’s most famous sites for street art and has been home to a rotating series of commissioned work by some of the world’s most renowned street artists since 2008,from Os Gemeos to JR.

Thousands of artists, cartoonists, and cultural figures were among the 35,000 people detained and later released by the government following Turkey’s failed military coup in 2016. 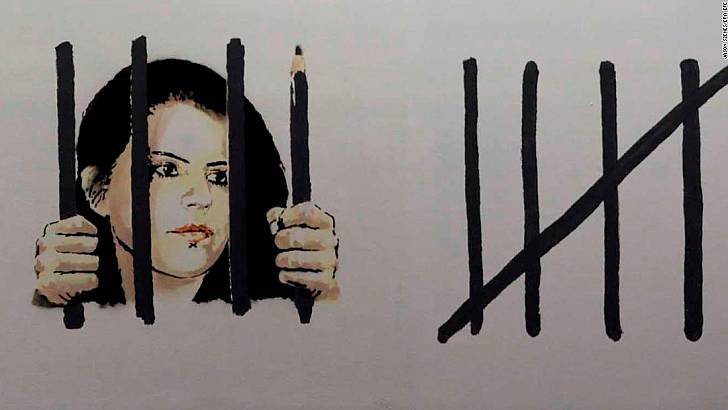 Thousands of artists, cartoonists, and cultural figures were among the 35,000 people detained and later released by the government following Turkey’s failed military coup in 2016. Since the coup attempt, president Erdogan's regime has acted increasingly totalitarian. A week before the mural was unveiled last a Turkish court sentenced twenty-four journalists to prison, claiming they have ties to terrorists who want to overthrow the president. In December, the Committee to Protect Journalists declared that Turkey held more journalists in prison than any other country.

“We stand alongside every artist who chooses to use his or her creative abilities to highlight human rights issues,”

said Jessica Goldman Srebnick, CEO of Goldman Properties and curator of the Houston Bowery wall, in a statement. Banksy’s contribution to the storied site was the second New York artwork of the famous yet anonymous British artist in as many days since his much-hyped 2013 residency. His handiwork was previously spotted on the face of a clock that graces the façade of a former bank and post office at the northwest corner of Sixth Avenue and 14th Street, in Greenwich Village, a building that is currently slated for demolition.The work features a stenciled rat, one of the artist’s signature images, who appears to be running inside a large hamster wheel. (mb)